The German biogas plant specialist WELTEC BIOPOWER has registered keen interest in its plant technology in Greece. In the past year, WELTEC expanded its market leadership in the southern European country by building four further projects and expanding three existing plants. Due to the great potential of organic residues to produce biogas and biomethane, especially in the north of the country, the climate-friendly energy source is playing an increasingly important role in the Greek energy transition. 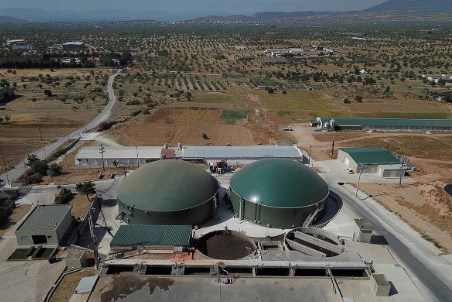 WELTEC BIOPOWER has so far been significantly involved in 17 of a total of 30 Greek agricultural and waste biogas plants. One of these AD plants has been built in Megara, 30 km west of Athens, in 2015. In the past year, WELTEC expanded this biogas plant and since March 2021 the plant is in operation with a doubled output of 1 MW. Around a year after the expansion, the operators' resume is consistently positive: “The plant was already running very successfully before the expansion. An above-average plant availability of 97% confirms that the extension with WELTEC was the right decision,” says John Tetoros, the Greek WELTEC Sales Partner, from a conversation with the owners.

It was also crucial for the extension that a sufficient amount of substrates were available. The area around Megara is known for keeping chickens and the biogas plant is also on the site of a chicken farm with 20 000 laying hens. As a result, some of the input materials are permanently secured. In addition to the chicken droppings, roughly equal amounts of olive oil pomace, cattle and pig manure, as well as whey are used for energy production. Since the plant was enlarged, the daily amount of the substrate mix has risen to 190 t.

Originally the plant comprised a digester made of stainless steel with a volume of 3993 m3, a 530 kW CHP and a storage unit. For the increased input volume, WELTEC BIOPOWER built another 3993 m3 stainless steel digester with a height of 6.30 m and a dia. of 28.41 m. In addition, another pre-storage unit, a second 530 kW CHP and an unpacking system for cheese and vegetables were installed. However, this unpacking system is only used in case of irregular deliveries of expired food. A solids feeder is not required since the pumpable substrates are brought into the storage units via a central pump block and then conveyed into the digesters.

John Tetoros is proud of this special energy plant: “The plant in Megara is one of the most efficient biogas projects in Greece. Our many years of experience and knowledge as well as the highly developed biogas technology from WELTEC are two decisive reasons. And the icing on the cake for the success of this plant is the strategically favourable location, the care of the operators, and the use of the heat for stables and offices. So, it is hardly surprising that one of the two operators decided to build another biogas plant in Ritsona, 40 km north of Athens. This is about to be completed and will go into operation in spring. Just like in Megara, only organic residues are used to generate energy in Ritsona.

These plant projects are examples of circular economy thinking and the consistent use of existing waste. Konstantinos Nikakis, Board Member of the Greek biogas operator association HABIO, emphasises the importance of such projects: “Waste-to-energy plants are urgently required in the new energy age in order to minimise harmful carbon emissions and to achieve climate neutrality. In any case, the supply situation with substrates of animal and vegetable origin is very good; the potential in Greece is enormous. In addition, there is also vegetable and other recyclable waste. In view of this amount of raw materials, agriculture has very good prerequisites to make its contribution so that Greece can achieve its climate goals.” It is now up to the individual players to bring Greece into the new energy age.

Read the article online at: https://www.energyglobal.com/bioenergy/02022022/weltec-biopower-expands-biogas-presence-in-greece/