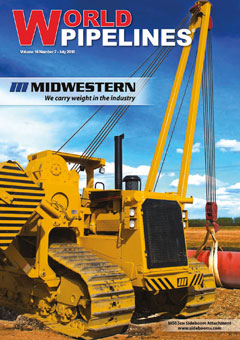 This month in World Pipelines we are featuring a special Latin America section, comprising a selection of articles addressing pipeline issues across the region. Gulf Interstate writes about international collaboration efforts for a new 75 km Mexican gas pipeline project, plus associated meter stations, flow regulation facility and tie-in with an existing pipeline.

SICIM discusses a Peruvian gas pipeline contract for the Gasoducto Sur Peruano, in which it performed EPC operations, facing the challenges of remote locations and extreme topography. Volvo looks at Mexico, Argentina, Bolivia and Peru and describes a host of pipeline projects in these nations. Shawcor focuses on Argentina: where it recently worked on a project to incorporate a continuous thermal insulation process in one of its facilities. And finally, we provide a South America overview, to make sure you’re up to date with all developments in the wider region.

Much news coverage has focused on Brazil in recent months, where President Dilma Rousseff has been forced to step down after impeachment proceedings were brought against her; she will face trial and Vice President Michel Temer will take her place for the duration. Brazil faces many stumbling blocks at the moment: a deep recession, inflation, the Zika virus and a corruption probe into Petrobras, the nation’s state-owned oil company.

Petrobras is the most indebted oil company in the world and, in the midst of globally low oil prices, it is having difficulty reducing its debt burden. The company has just announced a 1Q16 loss of Rs 1.2 billion (US$340 million) combined with a 5.4% decline in profits compared to 1Q15, and a loss in operating earnings (cash flow). March 2016 heralded the company’s biggest quarterly loss ever, after it wrote off Rs 49.75 billion (US$13.79 billion) in assets and investments.

Petrobras Chief Executive Aldemir Bendine is due to be relieved of his position soon: at the time of writing, former Presidential Chief of Staff Pedro Parente is being tipped for the role by Temer’s interim government. Parente’s immediate tasks as a new CEO would probably include the fast tracking of a US$15.5 billion asset sale plan to raise cash, repay debt and cut costs.

The government is set to support legislation that will reduce Petrobras’ control over some offshore oil resources. New rules will allow companies other than Petrobras to operate some oil production sharing contracts in pre-salt blocks. Petrobras has historically been very reluctant to relinquish control in these profitable, but challenging, offshore blocks.

Petrobras is also in talks to sell the natural gas pipeline unity Nova Transportadora do Sudeste SA (NTS), as part of the asset disposal plan. Brookfield is rumoured to have offered Rs 18 billion for the pipeline network, amid competition from Gas Natural Fenosa SA (Spain), Engie SA (France) and Mitsui & Co Ltd (Japan). The NTS comprises 2500 km of pipelines.

The interim government has suspended negotiations with construction companies caught up in recent corruption probes: to make sure that leniency deals are fair. Leniency deals would allow construction companies blacklisted in the corruption charge to bid for new state contracts if they admit wrongdoing and collaborate with investigators (as well as pay a fine). Some 31 contractors have been banned from signing new contracts with Petrobras since late 2014 amid bribery allegations. The leniency rules were expected to help boost the economy, which has stalled in the wake of impending corruption trials, but federal prosecutors object to the scheme, which they say encourages coverups.

The new Energy Minister, Fernando Bezerra Filho, hopes to improve the investment climate in the country by instigating a new tough approach to regulations and the contract awarding process. But with Petrobras potentially pulling out of entire market sectors in its efforts to divest debts, will this be enough to save Brazil?