Shell Catalysts & Technologies has signed an agreement with Drax Power Ltd (Drax) to provide the early front-end-engineering design (pre-FEED) study on carbon dioxide (CO2) capture technology for the first two carbon capture units at the Drax Group’s power station near Selby, North Yorkshire, UK. Each of the carbon capture units would be designed to capture about 4 million tpy of CO2. The pre-FEED study will be undertaken by TechnipFMC on behalf of Shell Catalysts & Technologies. This is one of the largest such studies awarded worldwide. If implemented, it will be the first low-pressure, post-combustion CO2 capture application for a biomass-fired power station and one that will result in carbon negative power generation – another global first. 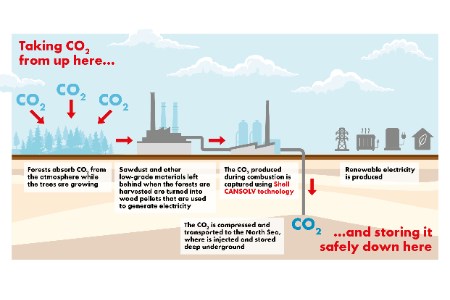 Drax Power Station is the largest, single-site, renewable electricity generator in the UK and supplies 12% of the UK’s renewable power. It uses compressed wood pellets, a form of sustainably sourced biomass, to generate 96% of its power. The pre-FEED study is to investigate the capture of the CO2 from this carbon-neutral process using the Shell CANSOLV® CO2 Capture System when potentially deployed on the first two of Drax’s biomass generating units. TechnipFMC is Shell’s strategic alliance partner for CANSOLV technology and provides engineering, procurement and construction expertise for such projects. The carbon captured would then be transported by pipeline for sequestration under the seabed in the North Sea as part of the bigger Zero Carbon Humber industrial decarbonisation project.

In June 2019, the UK government signed a net-zero greenhouse gas emissions target into law. Bioenergy with carbon capture and storage (BECCS) projects are a key part of meeting this net-zero ambition, as they can deliver negative CO2 emissions, which will be crucial to decarbonise hard-to-abate sectors of the economy such as aviation and agriculture. BECCS projects are carbon negative because the biomass is sourced from sustainably managed forests that absorb CO2 from the atmosphere while growing; this offsets the CO2 released by the fuel when used. The addition of carbon capture and storage means that more CO2 is permanently removed from the atmosphere than is emitted.

Andy Gosse, President, Shell Catalysts & Technologies, says, “We are proud to be working with Drax as a partner for this pioneering project. The Shell CANSOLV CO2 Capture System has been in operation since 2014 in a large scale, commercial, low-pressure application at SaskPower in Canada, where it is designed to capture up to 1 million tpy of CO2. Our experience in amine-based systems extends over 60 years: more than 1200 amine-based gas treating systems have been deployed. This enables us to extend with assurance the application window to this new post-combustion BECCS duty. The project with Drax represents a step up in scale and will be a flagship project not only for the companies involved, but also in the world of carbon capture and storage.”

Stan Knez, President of TechnipFMC’s Process Technology, added, “We are pleased to be selected along with our CANSOLV technology partner, Shell, to work on this important carbon capture and sequestration project. Decarbonisation is a key part of the energy transition programme and a project of this dimension will make a significant difference in reducing carbon emissions.”

The capture of CO2 will enable Drax to be the world’s first producer of carbon-negative electricity, thereby helping to deliver the UK’s net-zero carbon targets. At about 8 million tpy of possible CO2 sequestration from the first two Drax biomass generating units, this would be equivalent to taking two million cars off the road.

The pre-FEED study follows the completion of a successful feasibility study and is expected to run until early 2021. When the study is complete, Drax will decide whether to proceed with a FEED study.

Read the article online at: https://www.energyglobal.com/other-renewables/06112020/shell-technology-evaluated-for-carbon-dioxide-capture-project/