Sobradinho hydroelectric plant, located in the state of Bahia, Brazil, has been upgraded with a floating solar system developed by Ciel & Terre®, in partnership with SUNLUTION. The combination of the two energy sources - solar and hydro – hopes to provide an answer to the region's electricity consumption needs. 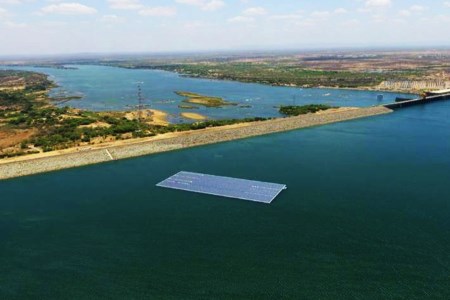 After the 305 kWp floating solar plant installed on Goiás farm, Sobradinho Dam’s floating solar array is the first in the country to reach the MW-scale. With its 3792 panels, the floating solar facility is expected to produce 1.7 MWh per year. The Hydrelio® floating solar system was produced locally in Brazil.

Sobradinho Dam’s floating solar plant capacity should increase by 1.5 MWp by January 2020. The facility is then projected to reach 2.5 MWp and produce more than 4.2 MWh per annum.

Ciel & Terre® designed a bottom anchor system specifically for the project, which is elastic and capable of supporting a water level variation of 13m.

Read the article online at: https://www.energyglobal.com/solar/16102019/new-floating-pv-plant-on-sobradinho-hydroelectric-dam/

X-ELIO has reached financial close for its Blue Grass Solar Farm in Queensland, Australia, ahead of full commercial operations expected in 1Q22.