Over the past few days, in collaboration with the Portuguese administration, Iberdrola has synchronised the first 220-MW turbine at the Gouvães hydroelectric power plant, delivering clean power to the grid for the first time. 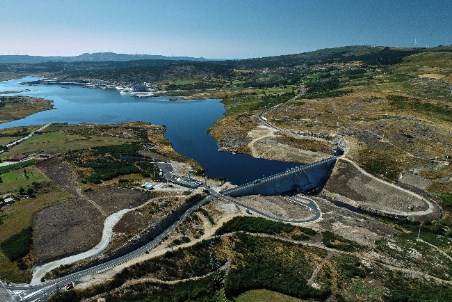 The Tâmega complex is one of Europe’s largest energy storage facilities with an investment of more than €1.5 billion. It comprises three reservoirs (Gouvães, Daivões, and Alto Tâmega) and three hydroelectric power plants with 1.58 MW capacity on the Tâmega river, a tributary of the Douro.

After eight years of construction work, the Gouvães and Daivões plants have now been completed and all of the generating units are currently undergoing commissioning tests.

Tâmega will be able to produce 1766 GWh/y, enough to meet the energy needs of neighbouring municipalities and the cities of Braga and Guimarães (440 000 households). When the Gouvães and Daivões plants are fully operational in the middle of this year, the large Tâmega giga battery will have enough storage capacity to supply 2 million Portuguese households for an entire day, and will contribute to the decarbonisation and energy independence objectives set by the Portuguese government. In 2024, with the commissioning of Alto Tâmega, the facility will be fully completed.

In addition, this infrastructure will displace 1.2 million t of CO2 emissions per year and diversify electricity generation sources while reducing fossil fuel dependency.

Creating jobs and economic development in the region

The development of this giga battery is boosting economic activity and employment in the region. Throughout the construction phase, 3500 direct jobs and 10 000 indirect jobs have been created, 20% of which from neighbouring municipalities. The project is supplied by over 100 companies, 75 of which are Portuguese.

This major clean energy project further highlights Iberdrola's commitment to a sustainable energy model, which began two decades ago. The Tâmega complex has been facilitated by the stable regulatory and macroeconomic environment created by the Portuguese government.

Despite the pandemic and economic challenges, Iberdrola's engineering and construction teams, supported by suppliers, contractors, and the government, have continued to work tirelessly to incorporate new renewable capacity into the grid.

Reversible turbines and pumped storage plants strengthen the electricity system. Energy is stored by pumping water from a lower reservoir to a higher one at times of low demand on the electricity grid. When there is high demand for electricity, the complex can release this stored water and produce high volumes electricity quickly. All this takes place with no polluting emissions to the atmosphere.

As a back-up to other renewable energy sources, such as wind or solar photovoltaic, this hydroelectric technology provides stability to networks and has a key role to play in the energy transition that will lead to the decarbonisation of the economy.

Read the article online at: https://www.energyglobal.com/energy-storage/28012022/iberdrola-develops-giga-battery-in-portugal/