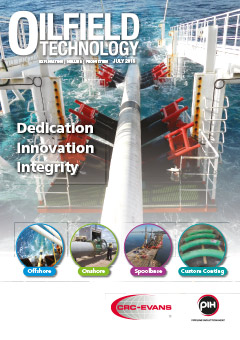 This month I want to discuss the future. And pay homage to the scientists carrying out exciting, cutting-edge research that we’re only just beginning to understand. Today, in laboratories around the world, the technology of tomorrow is being imagined, tested and designed.Nanoscience is nothing new – Professor Taniguchi coined the term nanotechnology in 1974, and physicist Richard Feynman had already introduced the ideas and concepts behind it in 1959. The oil and gas industry has been an enthusiastic early adopter, but we’re still getting to grips with the immense potential of controlling and manipulating individual atoms and molecules.

A few examples that have recently caught my eye include self-healing metals; harnessing the power of mother-of-pearl; nanofluid technology; and intravenous oxygen injection.

Set up in 2012, BP’s International Centre for Advanced Materials (ICAM) represents a 10-year, US$100 million investment to further understanding and use of advanced materials in the oil and gas industry. The academic industrial partnership (BP’s partners include the University of Manchester, the University of Cambridge, Imperial College London and the University of Illinois) has recently announced its results with self-healing materials, whereby polymer capsules embedded in metal release a fluid to repair damage, before it’s been discovered. When considering the significant costs of corrosion in the oil and gas industry, it’s obvious why people are taking note of these findings.

Currently, many waterproof coatings can release hydrogen gas, which if it penetrates the metal, causes hydrogen embrittlement, compromising the material. A Cambridge lecturer has created a steel alloy that could reduce this problem by ‘trapping’ the hydrogen, meaning the alloy could last up to 10 times longer.

In Germany, scientists at the DWI – Leibniz-Institut für Interaktive Materialien, are drawing inspiration from sea snails, particularly the mother-of-pearl (technical name: nacre) found inside the shells. Nacre is exceptionally stiff and durable, due to its unique structure – layers of solid and soft elements. The material is also light, non-flammable and gas-impermeable. Despite sea snails needing several years to produce a 1 mm layer of mother-of-pearl, the German team has developed a nanocomposite material that self-assembles and is ready in 24 hours.

This nacre-type coating is of interest to the oil and gas industry as it could reduce the diffusion of hydrogen, again stopping embrittlement of metals. Many believe it will be a game changer for transporting and storing natural gas, as it is developed into coatings for pipelines and storage tanks. The material is not commercially viable yet, and they’re still trying to make it more shatterproof, but the Germans estimate it’ll be on the market in 5 - 10 years.

There was another boost in nanotechnology for enhanced oil recovery earlier this year as Flotek Industries announced its new Complex nano-Fluid® (CnF) chemistries that will address the growing market for remediation and restimulation of existing, unconventional wells. In a low oil price environment, solutions that can save costs are likely to be popular.

Operators will not need to recomplete or refracture an existing producing well, instead Flotek’s solution will involve a basic ‘pump and pressure treatment’ utilising a coil tubing unit. A fluid system containing CnF will penetrate the existing fractures in the formation and alleviate wellbore blockages. This should result in increased production and could also increase proved reserves.

Finally, I want to draw your attention to the medical field, where researchers at Boston Children’s Hospital are perfecting an intravenous oxygen injection for use in emergency situations when patients are unable to breathe. The scientists have designed an injection made up of a liquid solution and gas-filled microparticles, 2 - 4 micrometres in size, which can supply the bloodstream with oxygen. Once injected, patients could regain near-normal blood oxygen levels within seconds. Animal tests have demonstrated subjects can be kept alive up to 15 minutes without breathing, suffering no ill effects.

As this technology improves, it has vast potential. In Boston they are envisioning a future where emergency personnel will all have access to easily stored syringes containing the lifesaving microparticles. For patients in remote locations, such as offshore platforms, an extra 15 minutes could make all the difference.

Oilfield Technology has covered nanotechnology numerous times in the past. And as we continue to cover the latest and greatest .