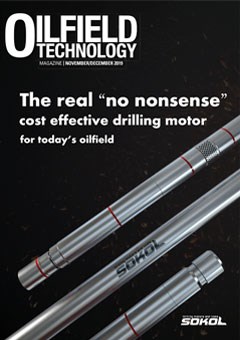 The weather is a fundamental element of small talk for the British. Come wind, rain or shine, you can bet that a member of the British public is talking about it. However, at the 2019 SPE ATCE in Calgary, Canada, my colleague Ben and I were for once not alone in mentioning the conditions outside of the exhibition hall.

On 29 September, the city of Calgary broke its all-time September daily snowfall record after 24.6 cm of snow fell.

And while the crisp, white snow may have looked pretty from the safety of my hotel room, or dusting the tops of the mountains on our quick post-show afternoon trip to Banff, the unexpected weather caused havoc on Calgary’s roads, causing over 200 accidents, dozens of injuries, and forcing several schools to close.

However, the snow did not last long and as it began to thaw, another early arrival was in store for the oil and gas industry, this time in the North Sea.

More than 2 months ahead of schedule, on 5 October 2019, Equinor and its partners Lundin Norway, Petoro, Aker BP and Total, celebrated the completion of the first phase of the Johan Sverdrup oilfield. Approved in August 2014, the Plan for development and operation (PDO) originally budgeted the project over NOK 40 billion more than the final NOK 83 billion expenditure and the field was not expected to start-up production until late December 2019.

With an expected recoverable reserve of 2.7 billion boe, the oilfield is the third largest in the Norwegian continental shelf. According to Irene Rummelhoff, executive vice president for Marketing, Midstream & Processing (MMP) at Equinor, “Oil from Johan Sverdrup is expected to provide revenue of more than NOK 1400 billion for the next 50 years, of which more than NOK 900 billion will go to the Norwegian state and society.”1

On 21 October, less than 3 weeks after the giant field came onstream, oil arrived at the Mongstad plant, north of Bergen, Norway. The oil was piped a distance of 283 km before being stored in caverns at the complex and prepared for shipping to markets all over the world.

Furthermore, the field is powered by electricity from shore, producing record-low carbon dioxide (CO2) emissions of less than 1 kg/bbl. By comparison, the average emissions from fields on the Norwegian continental shelf are 9 kg/bbl of CO2, and the corresponding figure for emissions globally is 18 kg/bbl CO2.

In the second phase of the development, the Johan Sverdrup field will also supply land power to other fields on the Utsira High, including Edvard Grieg, Gina Krog and Ivar Aasen. Thus, emissions savings from Johan Sverdrup alone are estimated at on average more than 620 000 tpy of CO2, which is equivalent to more than 310 000 passenger cars.

Phase II of the development was approved by Norwegian authorities in May 2019 with production start-up expected in 4Q22. As well as the supply of land power to other fields, the second phase includes the development of another processing platform (P2), modifications of the riser platform and the field centre, and five subsea templates.

Overall, early arrivals can often be an inconvenience, such as the snow in Canada, or guests to a dinner party. However, this is not always the case, as seen by the celebration of the North Sea giant. And the efforts to reduce emissions taking place in projects throughout the upstream oil and gas industry, such as Johan Sverdrup, will hopefully have a positive impact on our environment and might help decrease the frequency of extreme, unexpected weather conditions in the future.