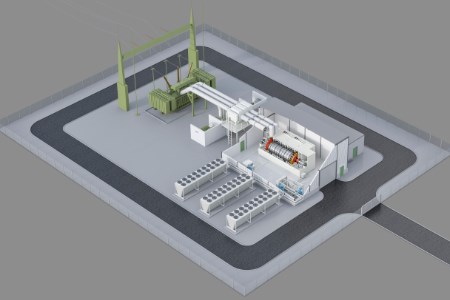 If the world is to meet the obligations agreed at the Paris COP21 meeting in 2015 of combating climate change by limited global temperature rise to below 2°C above pre-industrial levels, then renewable energy will have a significant role to play. But that growth in renewable energy comes with significant challenges to an ageing electricity transmission grid.

According to the IEA’s Renewables 2019 market report, the world’s total renewable-based power capacity will grow by 50% between 2019 and 2024, an increase of 1200 GW. When it comes to the key hurdles that needs to be overcome to facilitate this, the report points to system integration of wind and solar PV as one of the top three challenges.

Inertia is a key element of grid stability

One way that network operators are combating the challenges of increased penetration of renewable energy is by adding synchronous condensers to the system. These are large machines that work in a similar way to large electric motors and generators. They spin freely and manage changes in system strength, inertia and voltage control to deliver a reliable power supply.

The Australian march to a renewable future

One country that is leading the world when it comes to renewable energy is Australia. A report by Green Energy Markets predicted that within two years over a third of the country’s electricity will be generated by renewable sources, primarily solar and wind. Such is the success that renewable energy in Australia is growing almost three times as quick as Germany, the second fasting growing nation.

Australia’s fourth largest state, South Australia, is headlining this charge. An arid state, it is fifth largest in population with 1.7 million inhabitants, the majority living in or near its capital Adelaide. But despite its modest size, it is leading the way when it comes to renewable energy delivery. The state accounts for more than half of Australia’s wind energy as well as almost a third of its solar power and that total continues to grow.

Such has been the growth in renewables in the region that by the end of 2017 that there was enough to deliver the entire electricity requirements of the state with more wind and solar in the pipeline for development. The downside was that much of the renewable capacity did not have the power quality and inertia requirements to ensure that the grid remained stable and reliable under fluctuations in supply or demand.

The change in generation sources has created a shortfall in system strength and inertia within the network, which can make the power system less secure, and increase the risk of supply interruptions to customers. This presented a huge challenge to AEMO, the Australian Energy Market Operator, who were compelled to mandate that gas-fired generation be available to provide the system with the required inertia. To overcome the high cost associated with this strategy ,the South Australia transmission company, ElectraNet, opted to install four synchronous condensers on the grid; a pair at Davenport near Port Augusta and a second pair near Robertstown.

Inertia and short-circuit power are key elements of grid stability. However, within the new electricity generation mix, their availability is shrinking. This is caused by the addition of renewables-based power generation to the energy mix, phase-out of thermal power plants, new HVDC systems, and the extension of power supply systems to remote areas. All of this influences the stability of transmission networks, resulting in a worldwide renaissance of the synchronous condenser.

Siemens synchronous condenser solutions comprise a horizontal synchronous generator connected to the high-voltage transmission network via a step-up transformer. The comapny supplies a broad range of generators up to 2235 MVA. The generators are air-, hydrogen-, and water-cooled. The synchronous generator is started up and stopped by a frequency-controlled electric motor (pony motor) or a starting frequency converter.

When the generator has reached an operating speed that is synchronous to the system frequency, it is synchronised with the transmission network and acts as a motor providing reactive and short-circuit power to the transmission network. Synchronous electrical machines like synchronous generators can generally be used as synchronous condensers. Without active power delivery or consumption, the machines can act in the same way as a capacitor or a reactor, depending on the excitation field current.

Orders were placed for the first two synchronous condensers last year to be located at Davenport and starting in April 2021, two further modern synchronous condensers from Siemens will ensure that the power grid in the region remains stable and load tolerant. The second pair will be in the Robertstown substation of the Australian grid operator, who has commissioned Siemens to build both plants.

It is the first time that Siemens has supplied synchronous condensers in which a flywheel is connected to the generator. As the grids around the world evolve to accommodate the required growth in renewable energy, this project will provide an important reference for plants of this type in the area of grid stability. The additional rotating mass ensures greater power grid stability and allow the state and Australia as a nation to achieve its stated goal of expanding renewable energy.

For Siemens, the project includes engineering and the construction of both plants as well as two generators with associated circuit-breakers, two flywheels, two transformers, and associated control systems.

Ready for a renewable future

One of the largest renewable assets connecting to the grid is the 450 MWp Kiamal Solar Farm, just across the state border in Victoria. In addition to helping strengthen the electricity grid connected to the Kiamal solar farm, it will also provide the stability required for the numerous future wind and solar projects that are planned for the area. The importance of this technology will continue to grow as the country’s energy mix continues to diversify.

Although synchronous condensers are a well understood and conventional technology, the latest Siemens versions include state-of-the-art and most advanced generator circuit breakers, excitation, starting, control and protection systems and other auxiliaries that tackle the challenges facing the changing networks.

As renewables continue to gain market share over recent years, there has been a renewed interest in this established technology primarily because of the crucial role it can play as a cost-effective solution providing short circuit contribution that helps enhance system strength in the grid. Synchronous condensers are one of a suite of technologies Siemens has in its portfolio that help address the challenges of integrating large amounts of renewable energy into the grid.

Read the article online at: https://www.energyglobal.com/other-renewables/12122019/synchronous-condensers-provide-the-stability-for-australias-renewable-energy-aspirations/

The technology group Wärtsilä has won the contract to supply a 33 MW flexible power plant on a fast-track basis to the Barbados Light & Power Company Limited, the utility company on the Caribbean island of Barbados.