The growth of intermittent renewable energy across the globe has necessitated the deployment of energy storage technologies to fully replace fossil fuels with clean, dispatchable, and reliable power. According to IHS Markit, the share of co-located onshore wind, solar, and energy storage is projected to increase from 14% in 2021 to 35% by 2030 across the globe. Co-located systems combine two or more energy assets, a grid connection, land, substation, and power electronics, as well as permitting procedures, operations, and maintenance work. This set-up can provide several operational and financial advantages for asset owners while accelerating renewables deployment and improving grid stability. 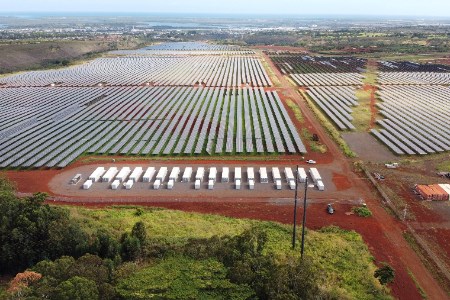 The untapped value of co-location

Developers in markets with high shares of wind and solar in the power mix can benefit from the additional revenue streams afforded by co-location. Capture prices for renewable energy are expected to decrease significantly as capacity grows, meaning that the price captured on the market by solar or onshore wind generators is eroded over time. The term ‘capture price’ relates to the actual electricity price achieved by a generator in the market, as compared to the wholesale price. Co-location mitigates this price cannibalisation, as energy storage allows asset owners to sell power during high-value peak periods and get paid for performing ancillary grid services.

This can be seen in Germany, where capture prices for standalone solar assets are expected to fall by 73% between 2022 and 2030 according to IHS Markit. Energy storage systems can help to recoup losses. For example, a 22 MW storage facility developed by Enel Green Power, ENERTRAG AG, Leclanché, and Wärtsilä in Cremzow, Germany, provides frequency regulation, energy arbitrage, and reactive power services.

As demand for clean energy 24 hours a day increases, many of the world’s top renewables developers are pursuing hybrid developments as a key competitive advantage. Hybrid plants lower the risk of underperformance because output is not limited to a single generation source. This offers a future-proofed investment that is better equipped to handle market changes and could result in additional financing for the energy transition.

Co-location can also help accelerate the deployment of renewable assets in markets with land-use constraints and high grid connection costs. This is the case in the US, where there is a 1300 GW backlog of clean energy projects awaiting interconnection to transmission grids.1 Since 2015, interconnection upgrade costs have grown from approximately 10% of project costs to between 50 to 100%.2 Developers can save up to 10% of balance-of-system costs compared to standalone projects, according to analysis by IHS Markit, by leveraging synergies across grid connection, land acquisition, and materials procurement. Co-location increases the utilisation of a single point of grid connection, which is a more efficient use of existing infrastructure – especially in places that desperately need more transmission and distribution investment.

Repowering existing wind plants, the process of replacing older turbines with newer ones also presents an opportunity to retroactively co-locate storage. IHS Markit predicts approximately 21.7 GW of wind capacity is expected to be repowered in the US and Europe. Advancements in turbine technology has allowed for the use of fewer turbines or smaller turbines to generate equivalent or even greater capacity than that of the original wind farm. This can reduce the amount of space needed for the wind farm, freeing up already permitted areas for more renewable energy assets.

Co-located configurations are also particularly attractive for islands and off-grid energy systems, such as remote mining, which typically rely on imported fuels, such as oil or diesel, for power generation. Last year, the members of the International Council on Mining and Metals, which consists of 28 top global mining companies, announced plans to achieve net zero emissions from mining operations by 2050. Employing renewables and storage can significantly reduce greenhouse gas (GHG) emissions while supplying a more stable source of electricity.

Many islands, such as Hawaii, US, have dramatically increased their share of renewable energy to achieve decarbonisation targets and lower costs of fuel imports. As of 2018, Hawaii meets 28% of its energy demand from renewable energy. Energy storage will play a key role in balancing the power system in Hawaii and maximising the value of renewable resources. The island of Oahu welcomed its first large scale solar-plus-storage facilities this summer and will bring on a second by the end of the year to ensure reliable delivery of electricity and contribute to Hawaii’s goal of 100% renewable energy by 2045.

Although wind-plus-storage facilities offer similar benefits, deployment thus far has been significantly lower than solar-plus-storage. One reason for this disparity is the difference in intermittency levels between solar and wind power. Wind generation has greater variability in output and does not follow predictable patterns like solar – since the sun rises and sets each day. Wind plants face longer periods of low or no production that are not always easy to forecast. The amount of energy that must be stored and shifted from a wind plant to offer an economic use of energy storage is high, given the longer periods of low production and the fact that wind plants are typically most productive during off-peak hours.

Regulatory policy and market frameworks also play an important role in ensuring the maximum value and benefit of hybrid plants. In the US, for example, most wind facilities take advantage of the federal production tax credit (PTC), a per-kilowatt hour (kWh) credit for electricity generated by eligible renewable sources. The US also offers an investment tax credit (ITC) for renewable energy projects which reduce upfront costs. Developers can claim the ITC for energy storage projects that are co-located with wind and solar. But developers cannot claim both, and the PTC is almost always more lucrative for wind projects. This explains why 63% of storage capacity planned to come online from 2021 to 2024 in the US will be paired with solar.3

The PTC was phased out at the end of 2021, which would have made adding energy storage more attractive to wind developers for its ability to participate in competitive markets and generate additional sources of revenue. But under the new Inflation Reduction Act, the PTC has been extended to renewable projects beginning construction before 1 January 2025. It also increased the ITC from 26 to 30%, and its definition has been expanded to include standalone energy storage projects for the first time. The revamped tax incentives will certainly accelerate overall renewables and energy storage deployments, but it remains to be seen how they will reshape the make-up of hybrid projects.

Developers and integrators have uncovered new ways to improve the design of co-located facilities in response to growing popularity. For example, increasingly solar-plus-storage projects are DC-coupled instead of AC-coupled. In an AC-coupled system, the battery system and solar plant are connected to separate inverters in parallel. In a DC-coupled system, solar generation flows directly to the battery via a DC/DC converter. Reducing the number of AC/DC conversions makes DC-coupled systems approximately 3% more efficient than AC-coupled systems. However, AC-coupling allows for more market revenue flexibility since the storage system can be used directly for market-bidding if not needed for the solar plant. This same trend is not being seen towards DC-coupling with wind assets and energy storage, likely because wind turbines naturally produce an alternating current.

Reinforcing the importance of software

Software is needed to oversee and control hybrid plant functions in optimised ways to maximise the value of the facility. Plus, as developers seek to stack multiple revenue streams with hybrid facilities, software can navigate dynamic market operations according to objectives, portfolio constraints, market trends, and uncertainties.

It is expected that there will be additional innovative applications of GEMS as more developers discover the benefits of energy storage co-location and hybrid renewable-plus-storage systems. Wärtsilä continues to share these learnings with power producers and developers to highlight the role of energy storage in the transition to a 100% renewable energy system.

Read the article online at: https://www.energyglobal.com/special-reports/26092022/renewables-and-storage-are-better-together/